HK Global Sources Consumer Electronics is the largest consumer electronics show in Hong Kong. Hundreds of exhibitors from across Asia will showcase a wide range of energy-saving products and technologies in consumer electronics, electronic components and security technologies. In addition to computer terminals and tablets, the service also includes new mobile phones and telecommunications equipment.

The last exhibition covered a total area of 20,000 square meters, with 418 exhibitors from China, Japan, South Korea, Italy, Dubai, India, Singapore, The United Kingdom, France and so on. The number of participants reached 37,466.

It is an important communication and information platform for the industry, enabling exhibitors to show themselves to the majority of qualified buyers and win the best exhibition award with the most creative booth design. Visitors can gain a comprehensive understanding of the latest industry developments and products at ces Hong Kong or attend conferences. 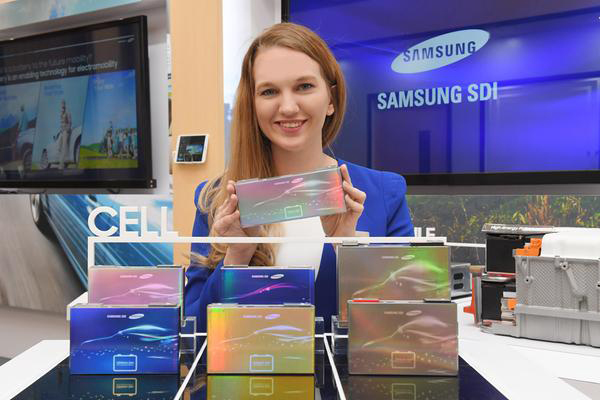 Samsung SDI Co., a South Korean manufacturer of electric vehicle (EV) and smartphone batteries, unveiled a new electric vehicle battery cell that offers a 600-kilometer driving range after a 20-minute charge at the 2018 North American International Auto Show (NAIAS) in Detroit, the United States, on Monday (local time).
The battery making unit of Korea’s largest conglomerate Samsung Group claimed that its new EV battery cell boasts of energy density high enough to allow the car to drive up to 600 kilometers on a single charge that takes only 20 minutes. The company presented the new large-capacity EV battery cell along with a slew of its new battery materials and products under the slogan “The Future of Electric Vehicles Starts Today” at the auto show in Detroit.

Among other new products, the so-called “graphene balls” drew huge attention. This is a latest battery technology that will help increase total charging capacity by 45 percent compared to existing lithium-ion batteries at a five times faster charging speed, according to the company. The technology was already highlighted in the November 2017 edition of science journal Nature Communications.

Along with it, the Korean battery maker showcased diverse battery cell lineups that can be applied to electric vehicles as well as plug-in hybrid electric vehicles (PHEVs). It also unveiled multi-functional module (MFM) battery packs that allow diversification in driving distances with a single battery pack and a battery cell with 20 percent reduced height that offers more internal vehicle space.

Visitors to Samsung SDI’s booth at the Detroit auto show will also find new battery cells and modules using the new 21700 standard cylindrical battery – which is 21 millimeters in diameter and 70 millimeters in height. The new 21700 battery technology allows a battery to have a 50 percent larger capacity than the existing 18650 battery technology, according to the company, adding that it has improved power output and longer battery life.

In today’s mobile world, battery life is precious. If you don’t believe me, go to an airport and watch the road warriors. It can get downright nasty when two spot the only available outlet at the same time.

It doesn’t take long to learn what helps preserve the current charge on the battery. What’s not well known is how to care for the battery itself. That’s just as important. Doing so allows the battery to operate efficiently. Here are a few ways to keep your lithium-ion batteries healthy.

1: Keep your batteries at room temperature
That means between 20 and 25 degrees C. The worst thing that can happen to a lithium-ion battery is to have a full charge and be subjected to elevated temperatures. So don’t leave or charge your mobile device’s battery in your car if it’s hot out. Heat is by far the largest factor when it comes to reducing lithium-ion battery life.

2: Think about getting a high-capacity lithium-ion battery, rather than carrying a spare
Batteries deteriorate over time, whether they’re being used or not. So a spare battery won’t last much longer than the one in use. It’s important to remember the aging characteristic when purchasing batteries. Make sure to ask for ones with the most recent manufacturing date.

3: Allow partial discharges and avoid full ones (usually)
Unlike NiCad batteries, lithium-ion batteries do not have a charge memory. That means deep-discharge cycles are not required. In fact, it’s better for the battery to use partial-discharge cycles.

There is one exception. Battery experts suggest that after 30 charges, you should allow lithium-ion batteries to almost completely discharge. Continuous partial discharges create a condition called digital memory, decreasing the accuracy of the device’s power gauge. So let the battery discharge to the cut-off point and then recharge. The power gauge will be recalibrated.

Also, for safety reasons, do not recharge deeply discharged lithium-ion batteries if they have been stored in that condition for several months.

5: For extended storage, discharge a lithium-ion battery to about 40 percent and store it in a cool place
I’ve always had an extra battery for my notebook, but it would never last as long as the original battery. I know now that it’s because I was storing the battery fully charged. That means oxidation of lithium-ion is at its highest rate. Storing lithium-ion batteries at 40 percent discharge and in the refrigerator (not freezer) is recommended

Final thoughts
Lithium-ion batteries are a huge improvement over previous types of batteries. Getting 500 charge/discharge cycles from a lithium-ion battery is not unheard of. Just follow the above guidelines.

One of the most frustrating experiences of a modern smartphone is running out of power in the middle of the day. Never mind the fact that you followed our tips for preserving battery life and that you only charged your phone yesterday evening – it’s a problem that we all still experience on a regular basis. As mobile phones become smarter and continue to integrate themselves into every aspect of our daily lives, we’re demanding more and more from them. We expect to find beautiful high definition displays, quad-core processors and power-hungry features such as GPS in our latest smartphones. At the same time, we’re asking our increasingly power-hungry phones to survive a day between recharging.

In this article, we turn our focus onto the batteries that are found inside mobile phones and tablets. We look at how batteries work, the different ways of measuring and classifying batteries and explore what the future for mobile phone batteries could look like. Finally, we ask whether the mobile phone of the future will see much improved battery life and how long we’ll have to wait before our smartphones can make it through the day without a charger.

A confluence of events is setting the stage for what may well be dramatic change in a key component of uninterruptible power supply (UPS) technology that really hasn’t changed much for 40 years or more.

I’m referring to the lead acid battery, the energy storage technology used in UPS systems, which remains much the same now as it did decades ago. But as the industry develops new types of batteries for devices ranging from smart phones to electric automobiles, we can clearly see the day when UPSs take advantage of these developments.

It’s coming at a good time, because customers are facing some difficult challenges with respect to UPSs, whether they’re for data centers, critical buildings, industrial processes or critical infrastructure. These challenges are driving the need for specific UPS requirements, including:

I believe lithium ion (Li-ion) batteries on Wikipedia hold great promise to address all of these challenges and requirements. In this post I’ll explain the four main reasons why.

First, Li-ion batteries provide multiple times the energy and power density as compared to valve-regulated lead-acid batteries (VRLA), which are the most common type currently used in UPS systems. As a result, UPSs built with Li-ion batteries take up only about one-third the space or less of a VRLA-based solution that delivers the same power.

That smaller footprint translates to reduced cooling requirements as well as about a two-thirds reduction in weight, at least. That means customers have more flexibility in terms of where they install the systems and can often avoid costly building modifications.

A third benefit is that Li-ion batteries always come with sophisticated battery monitoring systems (BMS) that provide a clear picture of battery runtime and health. It’s essentially the same technology that enables you to easily see how much battery life is left in your smart phone.

In contrast, VRLA batteries rely on chemistry that makes it hard to accurately predict when they’re going to fail. Think about your car battery: it may crank perfectly fine one day but the next it’s a little chilly and the battery fails, without warning. That won’t happen with Li-ion batteries.

Which leads to the final benefit of Li-ion batteries for UPSs: increased life expectancy. In theory, VRLA batteries used in UPS systems have a life expectancy of 10 years. But due to the constraints around being able to determine their actual health and life expectancy, in practice most customers replace them after 5 or 6 years.

In contrast, Li-ion batteries of the sort best suited for UPSs are expected to last for more than 10 years, reducing the burden and cost of battery replacements, as well as the risks of down time or load interruption during maintenance.

Of course no new technology comes without certain implementation challenges and Li-ion batteries are no different. First is the need to find the type of Li-ion battery that’s best suited for UPS applications. UPS requirements are quite different from those for, say, an electric car battery. Car batteries are designed to store lots of energy so the car can travel as many miles as possible before recharging. With UPS batteries, the concern is not length of run time so much as the need to deliver a lot of power quickly for a short period of time, usually just a few minutes until the backup generators kick in.

For a UPS we’re also not really interested in a battery that can cycle on and off thousands of times, because a UPS kicks in only occasionally. Rather, we need it to be highly reliable and safe, with a long life expectancy.

Secondly, we need a battery that can deliver a lower total cost of ownership (TCO) as compared to VRLA batteries. Li-ion batteries are already competitive on that front. They may cost more up front, but will last about twice as long as VRLA batteries. Li-ion batteries also have a far smaller footprint, which drives down both space and cooling requirements – delivering further cost savings.

I expect the TCO story to get even better in coming months and years, since Li-ion technology is still quite new with respect to UPSs. Prices should fall at a much faster rate than that for the mature VLRA technology.

I’d love to hear your thoughts on Li-ion technology and whether you think it could help address your own UPS challenges and requirements. Please let me know what you think using the comments below.